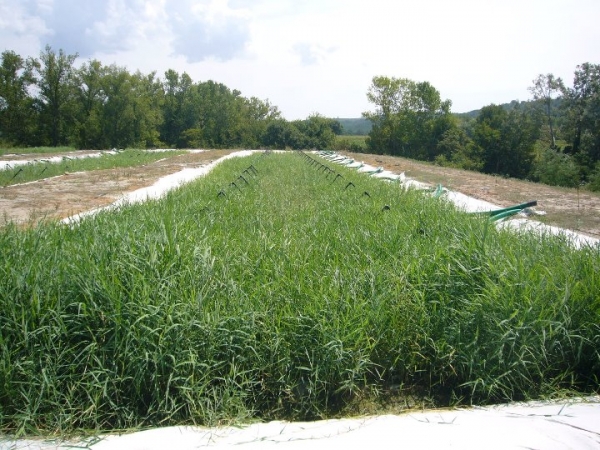 A ten years old system treating the wastewater produced by a winery in Central Italy. Cecchi is a famous wine producer in Italy and the production is certified ISO14001; all the wastewater produced by the "bottling department", located in Castellina in Chianti, Province of Siena, is appropriately treated before to be discharged in a nearby stream by a multistage constructed wetland.

The winery wastewater produced by the Casa Vinicola Luigi Cecchi & Sons (Castellina in Chianti - Siena) has been treated with a constructed wetland treatment system (CWTP) since 2001. The system consisted of a primary treatment phase with an Imhoff septic tank, followed by a single stage horizontal subsurface flow system (HF) (A=480m2) and then by a free water system (FWS) (A=850m2). The system was designed to treat flows of 35 m3/d. In recent years, the production at the winery has greatly inproved and consequently flows to the CW have increased up to ~70 m3/d. This prolonged overload resulted in a severe clogging of the HF bed. In order to solve this problem, an upgrade of the existing plant was designed by IRIDRA srl, Florence, and its realisation completed in 2009. The up-grade consists of three stages: a French system for raw wastewater (VRBF) followed by a horizontal flow system (HF), 4 parallel beds (the old and restored bed plus three new ones), followed by the existing FWS and finally by a sand filter before to discharge in fresh water (Gena River). The multi-stage CW system is designed to treat flows up to 70 m3/d with an average organic content of 2700 mg COD/l. This particular winery wastewater is characterized by a quite constantly high organic matter content, low level of nutrients, light acidity and large variations during the usual daily operations which are producing effluents. This winery, in fact, is producing wine elsewhere or buying it from local producers, and the industrial complex where the CWTP is located is only bottling and aging in cellars. So the effluents are created by the washing procedures of bottles, tanks, silos, ground floors, etc., operations that are planned with an industrial approach and well distributed in the annual productive cycle.